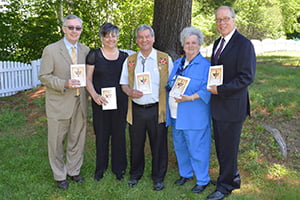 On June 19th at the New Brunswick’s Lieutenant Governor’s residence, a very special and important ceremony took place – the Gospel of John was presented in Maliseet.

The Canadian Bible Society (CBS) has been working on this project for over two years with a desire to provide the Gospel of John in Maliseet, the heart language of six Maliseet First Nations: Madawaska, Tobique, Woodstock, Kingsclear, Mt. Mary’s, and Oromocto. The Bible Society then decided to add the three other languages used in New Brunswick—English, French, Mi’kmaq.

Our prayer is that this hard work will bear much fruit.

Shirley Giberson (Governor for New Brunswick, CBS) has provided a write up of what took place that day:

Under bright blue skies and warm sunshine, the crystal clear Saint John River softly flowed as a large crowd watched the launching of the Gospel of John in Maliseet at Historic Government House.

In front of New Brunswick’s First Nations people, the book was presented to Lieutenant Governor Graydon Nicholas who is a member of the Tobique First Nation and the patron of the Canadian Bible Society, New Brunswick District.

“We want to make it possible for every Canadian to have the opportunity to experience the life-giving, life-changing word of God,” said Shirley Giberson, the Canadian Bible Society Governor for New Brunswick who presented his Honour Lieutenant Governor Graydon Nicholas with the first copy. 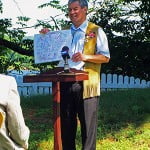 Nicholas said he was pleased about the new translation that is now offered for First Nations people to read and enjoy. “I know a lot of First Nation people are deeply touched. It is lovely to see so many people here.”

The event started with the burning of sweet grass, a ceremonial blessing in traditional aboriginal culture. There was also a traditional drumming to honour the new books that were published.

Dozens of copies that displayed both a cross and a dream catcher on the front cover were lined up on a table outside. By the end of the ceremony, most of them had been circulated.

“We also believe that the Bible must find its way into the public square once again,” said Shirley Giberson. “We must demonstrate that it is a current, relevant, and credible book that speaks into issues that people are most concerned about in contemporary Canadian society.”

The Maliseet Project Journey began over two years ago. The desire was to provide the Gospel of John in Maliseet, the heart language of six Maliseet First Nations: Madawaska, Tobique, Woodstock, Kingsclear, Mt. Mary’s, and Oromocto. The Bible Society then decided to add the three other languages used in New Brunswick—English, French, Mi’kmaq—but the first effort was the Maliseet translation.

“Bible translation continues to be one of the most effective strategies in language development and language ecology around the world. To this end, CBS is at the leading edge in the development, distribution, and support of the 21st Century tools. Supporting the work of Bible translation not only helps to communicate hope for the world to come, but also helps in this life for people whose languages and cultures are under threat,” said Rev. Ted Seres, National Director of the Canadian Bible Society.

The first outreach to Canada by the British and Foreign Bible Society was to a Mohawk chief, John Norton, who was assigned the task of negotiating land settlements with the British government.

In the spring of 1804, Norton arrived in England to negotiation land treaties. During the negotiations, he was approached by the newly formed British and Foreign Bible Society to translate the Gospel of John into the Mohawk language. When published in 1806, Norton’s work would represent a number of firsts for the British and Foreign Bible Society: first translation, first publication, and first distribution in a foreign land.

Rev. Ted. Seres explained, “this Maliseet translation is a learning instrument for them to learn their language and revive their culture.” In the future, the society hopes to incorporate audio as well as the written and digital forms.

“It is always great to be with the First Nations,” said Hart Wiens, Director of Scripture translations with the Canadian Bible Society.

Imelda Perley, and elder in St. Mary’s First Nations and professor at UNB stated: “Young people are looking for their language and culture 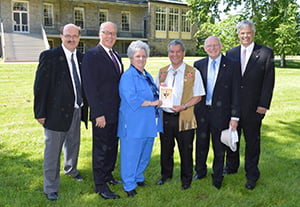 Giberson thanked the National Director, the Director of Translation, the Director of Ministry Advance (DMA) Atlantic Canada, Debbert and Greta Molton, and Rev. and Mrs. Watson Williams who spent hundreds of hours in translation. “Without your sacrificial giving of time and expertise, this project would not be completed—thank you.

“The Canadian Bible Society—New Brunswick District, is pleased to pay tribute to New Brunswick’s 30th Lieutenant Governor the Honourable Graydon Nicholas. Thank you for being our Honorary Patron.

“We are delighted the project to translate the Gospel of John into the aboriginal language of Maliseet is complete and now a reality.

“We pray this translation will come to symbolize tremendous things to the Maliseet culture as a whole. Your people have an important presence and a bright future. We understand you also have a past—one of difficulties and sacrifices which cannot be forgotten.

“This is a first for the Canadian Bible Society in producing the gospel of John in the four heart languages of our province (Maliseet, French, Mi’kmaq, and English), both in written form and digital. To God be the Glory.”

The ceremony concluded with a traditional aboriginal dance and a prayer of dedication in all four languages.

His Honour Lieutenant Governor presented copies of the Gospel of John to the youngest children there.

Everyone was invited inside historic Government House for a time of refreshments and fellowship.