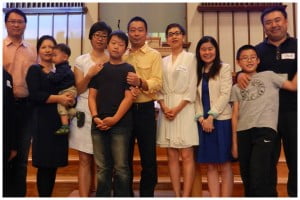 On September 20th, Grace Memorial Baptist Church (Fredericton, NB) celebrated Back to Church Sunday. This year’s annual event was a little extra special as nine people chose to make a declaration of faith by being baptized. The candidates were all members of the church’s Chinese Fellowship Group. It was a testament to the working of the Holy Spirit, as well as the dedication of the group’s leaders that they felt led to take this step.

The Chinese Fellowship Group began at Grace Memorial around the year 2012. Tony Yin and his wife, Rebecca Tang, originally started the group in their home. Newly married, and new to Fredericton, the couple wanted to reach out to others in a similar position and make them feel more welcome in the city. Tony’s job at a local bank gave him the opportunity to meet other Chinese newcomers and he embraced that opportunity to invite them to his home and develop relationships with them. Before long, 15 to 20 people were meeting weekly in the couple’s home for worship and Bible study. Rebecca’s mother, Lily, led the study and cooked a meal for everyone as well.

When Tony and Rebecca’s son was born, it became evident that the group had outgrown its space. At the same time, the leadership of the church had been looking for ways in which they could support the Chinese Fellowship. After Tony and Lily met with the Pastor and the Deacons, it was decided that the group would start meeting in the church’s Family Centre. Tony, Rebecca and Lily now lead a Chinese outreach that meets faithfully every Saturday for a meal, worship, and Bible study. The group has now grown to over 40 members, most of whom are from young families.

Although Tony needed to act as an interpreter for the seven adults and two children who shared their faith stories before they were baptised, the joy they felt at publicly acknowledging Jesus as their Lord and Saviour needed no translation. The stories had many people reaching for their Kleenex.

Two fathers were baptised with their sons. In a video that was shown during the service one of the young boys mentioned how the youth group was studying the book of John and learning that Jesus is the light. The lesson obviously had an impact on him. One of the fathers, who was a computer technician for a large company, talked about how he largely ignored God until one day he couldn’t get a computer to start up. The computer was filled with important and sensitive data that would likely cost him his job if he couldn’t retrieve it. He remembered how his grandmother used to tell him to pray if he needed help and so he said, “God, if you are real, please get this computer to work.” Afterwards, he tried the machine again, and it started up! Another person talked about being afraid to tell his Buddhist family that he was a Christian, because he knew they would never talk to him again.

The Grace congregation was blessed to hear these stories and is happy to have nine new brothers and sisters in Christ.