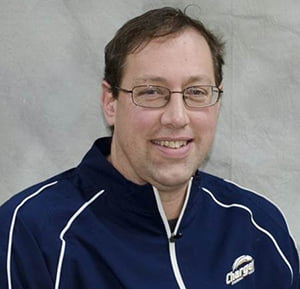 It was a difficult but ultimately a blessed summer for Dr. Greg Maillet, Coordinator of Basketball at Crandall University. Coming off a season in which he lead the Charger’s Men’s Basketball team to the ACAA semifinals (after previously leading them to the league final in 2009), Maillet was busy preparing for this season when he suffered a sudden stroke. Fortunate to be able to call an ambulance for immediate help, damage was limited to a brain stem stroke, so that the problems did not include left or right brain damage, but were ‘only’ the unconscious functions, such as breathing, swallowing, and balance. Due to the problems with breathing, this kind of stroke is often fatal. “One of my assistant coaches from minor basketball, Ted Kogler (1979 TigerCat CFL draft pick) visited me and summed it up well,” laughs Maillet. “Ted said, ‘So what you’re telling me is that you can’t eat, can’t walk, can’t talk…. but otherwise you’re in great shape!”

Though a nearly three month hospital stay was needed to correct these problems, Maillet learned not only to appreciate the small things in life – “a drink of water tastes pretty good after not eating or drinking for 2 months” he says, adding that the hospital nurses and doctors were “incredible” — but more importantly gained what he calls “a unique perspective on eternity.” Maillet was in a coma for several days, after his wife and oldest daughter had been told that he had stopped breathing during an initial MRI. “I remember very little from this time,” Maillet says, “but when I woke up there was one very vivid memory that I immediately told to those closest to me. While I was lying on the ground, Jesus came, helped me up, and began to walk with me. He was smiling, put his arm around me, and certainly it was the happiest I’ve ever felt. Silently, however, I communicated the idea that I was not ready to die. My own father passed when I was only four, and being alive for my wife and three children as they grow up has always been extremely important to me. Somehow Jesus understood that, and the next thing I knew my arm was put around my wife, with her arm around our eldest daughter, and her arm around my son, and his arm around my youngest daughter. And arm in arm we just walked back together into time.”

Maillet understands how such experiences sound to non-Christians, but denies that there is anything unusual or exceptional about it. “Read 14 Minutes by Alberto Salazer,” he says, or “the book Proof of Heaven by a once atheistic neurologist,” or “listen to what the very non-pious New Brunswick writer David Adams Richards says, in his short essay God Is, about a young nephew seeing long dead ancestors while dying. There is a lot of evidence out there that the afterlife is real.” Even without such experiences, Maillet stresses, “Jesus is right about so many things in this life that we ought to be ready to trust the next life to Him as well.” Maillet also gained new appreciation for the power of prayer, as throughout his ordeal he received cards and prayers from the Crandall community especially, but also from family and friends in Nova Scotia, Alberta, Ontario, Northwest Territories, England, Texas, Hawaii…even as far away as Africa, Lithuania, and China.

This community and his family’s love have continued to sustain Maillet while he remains on medical leave, still afflicted by a painful post-stroke condition known as “Wallenberg Syndrome.” He is very pleased, however, with the direction of Chargers basketball under new Head Coach Patrick Havard, a coach Maillet met while playing against UPEI when Havard was an assistant there. Maillet hopes to return as a Professor of English at Crandall next year, and to continue working with Havard and AD Bryan Cawthra to further build the Crandall basketball program. “Ultimately it’s not about wins or losses for us,” Maillet says, “but rather the character of the men and women who graduate from our university.”