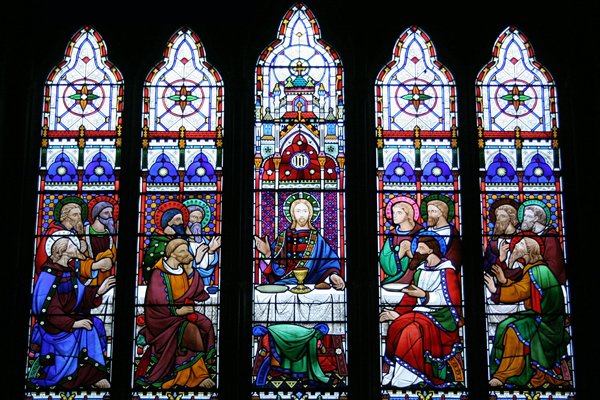 7 Now the Festival of Unleavened Bread arrived, when the Passover lamb is sacrificed. 8 Jesus sent Peter and John ahead and said, “Go and prepare the Passover meal, so we can eat it together.”

9 “Where do you want us to prepare it?” they asked him.

10 He replied, “As soon as you enter Jerusalem, a man carrying a pitcher of water will meet you. Follow him. At the house he enters, 11 say to the owner, ‘The Teacher asks: Where is the guest room where I can eat the Passover meal with my disciples?’ 12 He will take you upstairs to a large room that is already set up. That is where you should prepare our meal.” 13 They went off to the city and found everything just as Jesus had said, and they prepared the Passover meal there.

14 When the time came, Jesus and the apostles sat down together at the table. 15 Jesus said, “I have been very eager to eat this Passover meal with you before my suffering begins. 16 For I tell you now that I won’t eat this meal again until its meaning is fulfilled in the Kingdom of God.”

17 Then he took a cup of wine and gave thanks to God for it. Then he said, “Take this and share it among yourselves. 18 For I will not drink wine again until the Kingdom of God has come.”

19 He took some bread and gave thanks to God for it. Then he broke it in pieces and gave it to the disciples, saying, “This is my body, which is given for you. Do this in remembrance of me.”

20 After supper he took another cup of wine and said, “This cup is the new covenant between God and his people—an agreement confirmed with my blood, which is poured out as a sacrifice for you.

21 “But here at this table, sitting among us as a friend, is the man who will betray me. 22 For it has been determined that the Son of Man must die. But what sorrow awaits the one who betrays him.” 23 The disciples began to ask each other which of them would ever do such a thing.

24 Then they began to argue among themselves about who would be the greatest among them. 25 Jesus told them, “In this world the kings and great men lord it over their people, yet they are called ‘friends of the people.’ 26 But among you it will be different. Those who are the greatest among you should take the lowest rank, and the leader should be like a servant. 27 Who is more important, the one who sits at the table or the one who serves? The one who sits at the table, of course. But not here! For I am among you as one who serves.

28 “You have stayed with me in my time of trial. 29 And just as my Father has granted me a Kingdom, I now grant you the right 30 to eat and drink at my table in my Kingdom. And you will sit on thrones, judging the twelve tribes of Israel.