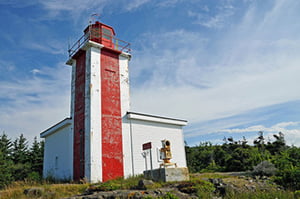 Lighthouses aren’t particularly helpful for out-of-control ships on high seas. They let you know you’re in danger but stay distant and detached. They tell you what’s wrong but don’t make it right. They look on as you languish.

I suspect the person who first compared churches to lighthouses had never been shipwrecked within sight of one.

I recently read of such a wreck. Nova Scotia’s Point Prim Lighthouse watches over the Digby Gut – the channel between the Bay of Fundy and the Annapolis Basin (tidal currents reach 6 knots in the Gut). On December 3, 1883, the steamship Princess Louise was being towed through when the towline broke.

Many souls have been lost there (Point Prim is named after the lone survivor of another wreck) and this time eight were lost. But two were saved thanks to the heroic efforts of the lighthouse keeper’s son.

Just as lighthouses only help craft still able to navigate, sometimes churches (like all religions) only help the morally muscular. Us floundering failures, however, need a pilot to climb aboard or a lighthouse keeper’s son to brave the waters we can no longer battle or bear.

Thank God he has a Son. In fact, because of His bravery God now has many “sons”. So, if we insist on thinking of our churches as lighthouses, let’s make sure they’re full of “sons” ready to rush out and rescue the languishing and not full of people willing to wait and welcome the lucky.

In these days of cultural chaos fewer people will be lucky enough to find themselves in our buildings, enjoying our meetings and understanding our language (no matter how good their English is). So, how do we reach and rescue them?

I do know that if we’re seriously asking that question and ready to spend the rest of your lives finding answers, we’re in for an exciting ride with great company…

Get out there and make disciples of all people groups…and I’ll be with you from start to finish. (Matt 28:19, paraphrased)

I do know we must do in our communities what we send cross-cultural missionaries to do in other continents – enter people’s worlds, tasting their food, language, joys and sorrows. I do know rescues happen face to face and are not remote or risk-free. I’m not sure how the lighthouse keeper’s son helped that December night, but I bet he got wet (and cold).

I love meeting people in Atlantic Canada who are doing just that – “getting wet”. I read the Point Prim story on the Digby ferry coming home after being with people who are living for Jesus within Mi’qmaw communities. They’ve been rescued by the Lighthouse Keeper’s Son and are joining him in his work, entering cultures and finding him, themselves and others there.