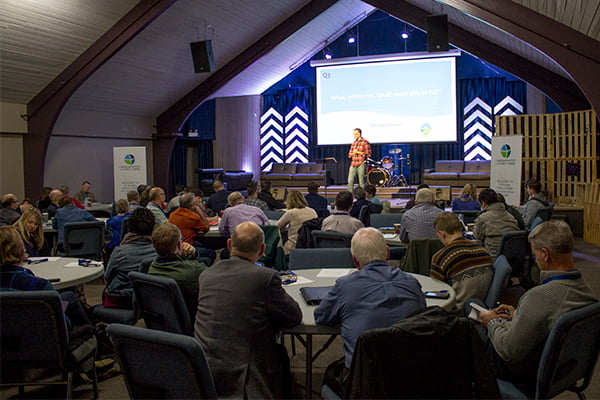 Question: What do you get when you put 70 keen church planters, energized re-planters and creative entrepreneurial dreamers in a room together for a day? You get INVIGORATED beyond imagination! That was the case at Hillside Baptist Church in Moncton on October 27th. The CBAC Centre for New Congregations hosted a fast-paced one-day ReShape Summit for leaders all across our region. They came from most corners of our Maritime provinces with questions, plans and dreams!

God is birthing a new thing across Atlantic Canada. A new vision is being uncovered as church leaders begin to dream about reaching into this new generation and taking intentional steps to plant and re-plant congregations for increased effectiveness in a brand new day.

The buzz at Hillside began around 8:00am and didn’t stop for 8 hours. New friends were discovered and brand new dreams uncovered and sharpened. With Jerry Reddy, Rob Nylen, Phil Woodworth, Anna Robbins and Stephen Elliott as the 5 keynote speakers, the line-up was top-shelf and as powerful as any conference you could find ANYWHERE. Jerry Reddy kicked off the day reminding us of how great the church can be when it’s firing on all cylinders. Rob Nylen uncovered some key leadership traits that are non-negotiables for new congregation leaders. Phil Woodworth very clearly and practically laid out an effective model of multi-site church that is becoming increasingly effective around Atlantic Canada. Anna Robbins, as only Anna can, explained to us some of the complexities of the culture in which we find ourselves and Stephen Elliott challenged us at the end of the day to return to the “root” and remember the power of the Spirit of God in all we do!

Throw in a few giveaways. Add a helpful tour of the new Hillside facility. Toss in a great lunch and the buzz of conversation for eight hours and that makes for an AWESOME day! Be watching for details for the Reshape Summit 2017!