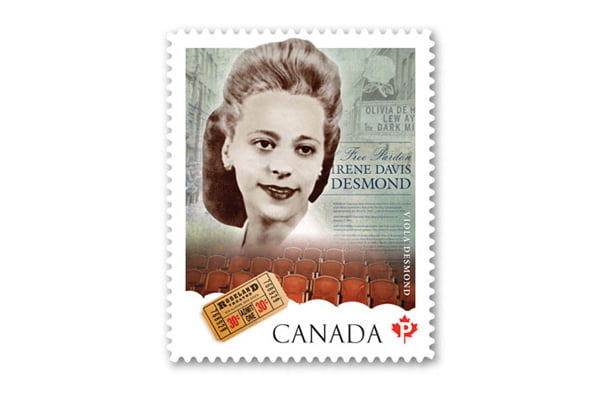 What do these have in common: A pardon, a stamp, a ferry, and a $10 banknote?

They all bear the name of a reluctant Canadian heroine who championed NS human rights for herself and her community. They are a testimony to the power of justice to prevail over wrong.

Viola Desmond was a Black professional woman, an entrepreneur who owned and operated her own beauty salon and school in Halifax. Having been denied access to beautician training in Halifax because she was black, she went to Montreal, Atlantic City and New York for professional training. She saw a need for beauty products for black women so she developed her own line. Ms. Desmond was a determined activist for social equality.

Standing up to Injustice
She is most well known for the events that occurred in November, 1946, in a New Glasgow movie theatre. She asked for a seat on the lower level because of her difficulty seeing from a distance. She was told that Black people could only sit in the balcony. Ms. Desmond proceeded to sit in the lower section and refused to move. The owner called the police and she was physically removed, injuring her hip and her knee. She was charged with defrauding the government of a 2 cent tax, spent 12 hours in jail and was fined $26.

Seventy years after Viola Desmond’s experience, racial disparity is still present in Atlantic Canada. The practice of racial profiling – targeting individuals for suspicion of crime based on their race, ethnicity, religion or national origin – is a reality here. We witnessed this recently with the African Nova Scotian woman from Hammonds Plains who was falsely accused of shoplifting. Again we became aware that not all Canadians are treated equally. The church and the community united to bring the issue to the forefront and a resolution was reached with the offending retailer.

Our churches still have a role to play in shaping a just society for all in Atlantic Canada and beyond. Let’s all do what we can to follow the words of the prophet Isaiah: “Learn to do right; seek justice. Defend the oppressed. Take up the cause of the fatherless; plead the case of the widow.” Isaiah 1:17