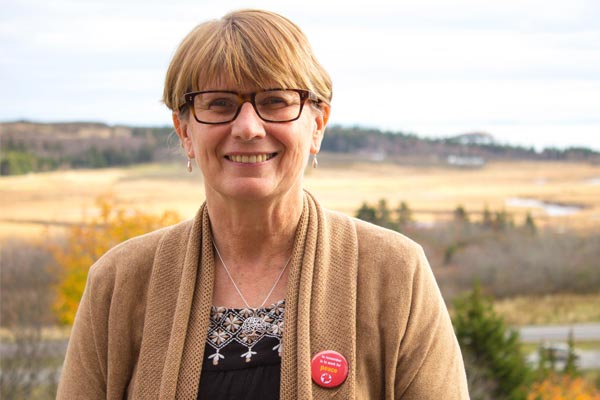 With deep respect and a certain sadness, we announce the resignation of our friend and co-worker Dr. Lois Mitchell as the Director of Public Witness & Social Concerns with the Canadian Baptists of Atlantic Canada, effective December 31, 2016. Through a period of reflection and self-evaluation, Lois believes God is calling her to step back from official CBAC responsibilities, to focus her time and efforts on her family and teaching responsibilities at St. Stephen’s University.

As the CBAC family, we want to say THANK YOU to Lois! Words cannot express how deeply grateful we are that she has allowed her gifts to be used to bless our churches. With grace and truth, she has skillfully walked us through some deeply challenging issues and has helped us view scripture in light of changing cultural values, always with the underlying goal of guiding us to be relevant in the ways we share the love of Jesus in our neighbourhoods.

CBAC Executive Minister Rev. Dr. Peter Reid had this to say: “Lois has been a tremendous gift to this family of churches and we cannot overestimate how her thinking and input on justice and social concerns have helped shape the way we think about current cultural issues. We are deeply indebted to Lois for pushing us to thoughtfully consider how the Gospel of Jesus Christ compels us to respond to poverty, racism, climate change and many other matters. Personally, I will miss Lois’ brilliant thinking and her deep commitment to helping us live out the Kingdom mandate of Jesus in the twenty-first century.”

Lois began her work with our family of churches in 1991 as a member of the Social Action Commission. She then served as the chair of that Commission until 1999 when she became the part-time Director of Public Witness and Social Concerns. She has been working with us ever since.

Over the years Lois has researched, written and spoken on a number of issues, most notably domestic violence, LGBTQ issues, racism, mental health/illness, child abuse response and prevention, and most recently, physician assisted suicide. She has also challenged us to think about global poverty and justice issues arising from the effects of globalization. She worked for a number of years with Canadian Baptist Ministries in the area of Justice Initiatives.

“Lois has been one of the most engaged and engaging thought-leaders in our Canadian Baptist family. Her thoughtful and biblically rigorous articulation of social issues has been formative in our churches and many Baptists leaders, including me as my doctoral thesis supervisor,” says Dr. Terry Smith, Executive Director of Canadian Baptist Ministries. “Her deep discipleship with our Canadian Baptist students through the Praxis program has helped form a new generation of church leaders. We thank Lois for her skills, gifts and devotion to Christ’s mission.”

Lois has given time and leadership to a number of CBAC working groups, including the Racism Working Group, the Child Abuse Response and Prevention Working Group, the LGBTQ Working Group, and the Indigenous Relations Working Group. She has spoken at events here in Atlantic Canada as well as across Canada and abroad. She has also been an adjunct professor at Acadia Divinity College, Crandall University and she continues to be the part-time Director of International Studies at St. Stephen’s University.

She has been involved, on behalf of CBM and CBAC, with a number of other agencies, including the Canadian Foodgrains Bank, the Evangelical Fellowship of Canada, the Canadian Council of Churches and the Muriel McQueen Fergusson Centre for Family Violence Research at UNB.

In 2009 she was awarded an honorary Doctor of Divinity degree from Acadia University and in 2010 she was a member of the official Canadian Delegation to the World Religious Leaders Summit (held in conjunction with the G8 Summit in Toronto).

Over the last few decades Lois has written blogs, articles, chapters in books and bible studies on a variety of topics and for diverse audiences. She has spoken in many CBAC churches and Associations and has set up and contributed to Facebook groups, one dedicated to issues of faith and justice and another to mental health.

“It’s time to pass the baton,” says Lois. “I firmly believe that every challenge facing our society today is an opportunity for the church to be a witness to the grace and peace of Christ. As we join God in changing Atlantic Canada one neighbourhood at a time, we need to understand our times and be able to demonstrate the relevance of the gospel by being involved in our communities in ways that bring hope and peace. We also need to be able to speak truth to power in ways that can be heard. It is not about out-shouting those who disagree with us and fighting about whose rights should be honoured, but earning the privilege to speak in the public square and then to articulate the wisdom and love of God.”

Even though Lois will conclude her formal ministry with us in December, she hopes to continue to be involved with our CBAC family in a volunteer capacity.

Thank you Lois! May God bless you as you move into the next stage of your calling.