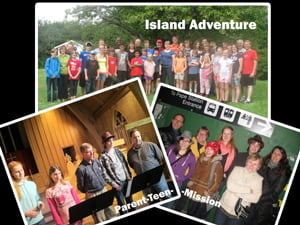 When children and teens join with their parents in serving God, families and their faith is strengthened.

This year the Youth & Family Department of the CABC offered opportunities for families to participate in two mission trips – one to Toronto in March and another to Campobello Island in July. Although the destinations were very different, the team members experienced God at work not only in their lives, but in the lives of those touched by the mission.

If you are looking for a great family experience, consider one of our Convention mission trips which are held alternate years with Tidal Impact. How exciting it would be to watch your children serving beside you in God’s mission to the world!