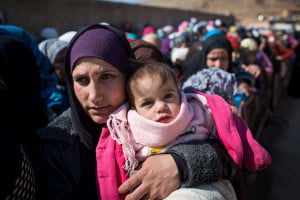 What would it take to force you out of Canada? Aside from our recent winter, would natural disaster or social upheaval force you to abandon your home, belongings, and say “goodbye” to life as you know it? Can you imagine what would force you to flee?

In the last 4 years, at least 4 million people have said goodbye to Syria and have become refugees in neighbouring countries while millions more have been displaced within the country. By the end of 2015, Lebanon will be hosting over 2 million refugees (mostly Syrians). One in three people in Lebanon will be a refugee!

Lebanon & Syria have been politically and culturally at odds and often considered enemies. The situation is untenable and dangerous and the UN has called on developed countries for help. Canada has promised to bring 10,000 Syrian refugees over the next three years.

Through CBM, our partner church, the Lebanese Baptists, have been helping 20,000 refugees providing food, shelter, mattresses, stoves and education programs. It’s been miraculous and people have experienced the love of Christ. But now we are being asked us to provide durable solutions for the most needy families.

As Canadian Baptists, we are nationally committing to help 100 Syrian families. The CABC has a goal of bringing 50 families to Atlantic Canada! This is huge! Presently between CABC churches only sponsor about one family a year. We will all need to play a part in this.

Paradise Baptist Church is a small congregation outside of Bridgetown, NS, who believe God is calling them to sponsor a family. “We’re tired of just watching world news. We want to change reality for at least one family. We want to welcome them, look after them and give them a chance for a new life.” The church has no prior sponsorship experience but is leading our response to the Syrian refugee crisis.

While some of our churches are struggling to exist, sponsorship can be a life-giving reminder of why we exist. We have God’s love to share, for we were all homeless refugees and He made us his children.

It won’t be easy. However, despite the difficulties, may both welcomers and welcomees, experience more of heaven on earth. And right now, it looks like the first family to arrive will get to hear their hosts say, “Welcome to Paradise.”