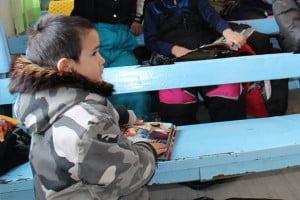 Identifying effective, strong churches and volunteers sharing resources with others is one of our 2025 Goals.

Some of our CABC churches are forming partnerships that cross borders and barriers, exceeding our own expectations, and proving that God is on the move!

One story comes out of Penobsquis Baptist Church (PBC), a thriving rural church just outside of Sussex, NB. Led by the youth group, the church has forged a connection with the remote community of Kimmirut, Nunavut. Kimmirut is the southernmost community on Baffin Island with a population of less than 500 people (http://www.nunavuttourism.com/regions-communities/kimmirut).

So how did a rural church in NB become connected with people in a remote place like Kimmirut nearly 2000 km away? Glad you asked. Here’s there story.

Senior Pastor Rev. Dr. Neville Gosman has been hearing ministry stories from Nunavut since 2001. A couple from his church in Dartmouth moved to Nunavut following God’s leading and a heart for the Innu and Inuit people. “Today, they have Innu grandchildren and serve as God guides in the one church in their isolated hamlet,” shares Neville. “I was moved by Ron and Krista’s courage and sense of call to serve among fellow Canadians in such a remote location.” This story, along with a video Neville watched about revival in Nunavut in the late ‘90s and early 2000s (https://www.youtube.com/watch?v=BwwU7EdqNx4), has helped to lay the groundwork in connecting Penobsquis to Nunavut.

Enter Rob and Julie Matthews. Julie grew up at PBC, and served with the Covenant Players (a drama and singing ministry) for 19 years. In South Africa, she met her husband Rob, a musician and percussion specialist who teaches at both public school and at the university level. They moved to Canada and Rob searched for a teaching position, and ended up settling in Kimmirut, Nunavut two years ago.

From the start, Rob and Julie hit the ministry floor running – Rob as a teacher in the public school and Julie as hostess of the town’s only motel. In a matter of weeks, PBC became aware of the needs in the local Anglican church, school, and community. God moved in the hearts of PBC and they responded!

Here is what followed:

The Anglican Church is the only church presence in the community and they have welcomed Rob, Julie and their two girls. Julie: “This is something we are doing at the request of the church here in Kimmirut. It has been awesome to be accepted by the community here so much that they approached us to do a Sunday School!” A few months ago they helped to re-launch Sunday school and at Easter they had 44 kids in attendance.

Neville: “As for our future partnership with the elders, school and Anglican church in Kimmirut, we do not know what God has in store for us ultimately. And yet, with Rob, Julie, and family there as ‘plain-clothes missionaries’ on the ground, we have no doubt PBC will continue to support and pray for whatever their hearts discern as being from the Lord.

God has been at work for a very long time in the North. It has been our joy as sojourners with the Kimmirut Church to do our small part to reap a harvest in the land of the midnight sun.”