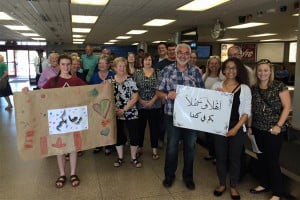 Before malaria was linked to mosquitos, there were wild remedies and precautions. Knowing the source of problems is crucial.

What if drunkenness hadn’t been linked to alcohol? How would we view DUI accidents and fatalities? Would we be handing out death sentences or driving tips?

What drives terrorism? What makes people want to destroy others and themselves? What if the cause is not cultural or ideological but spiritual?

How could we tell? Is there a breathalyzer test for detecting evil spirits (as well as liquid ones)?

In Scripture, “devil” comes from “diablos” meaning “destroyer”. It’s closely connected to “diaballein” – “to divide”. In destroying and dividing the devil often uses words, true and false ones – accusations and lies.

So before we post or share the next terrorist/Muslim/refugee rant, let’s ask ourselves: Is this divisive? Does this point the finger at certain humans and not at something all humans struggle with? Are our blogs basically trying to do the same things as their bombs?

Martin Lloyd-Jones, who preached in the UK in the wake of WWII, said that global scale evil is only the individual writ large. If you don’t see yourself in the evening news, you don’t know yourself. We all wrestle the same foe.

Take a breathalyzer. Consider the source and remember there’s another Spirit available to us – the Spirit of truth, unity, and life – the Spirit of Christ who died for his enemies.