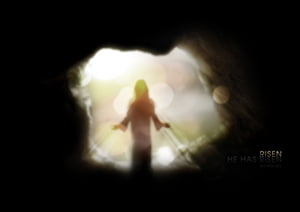 In an age of skepticism and futility Christianity offers hope. Jesus reversed the effects of death and circumvented the meaninglessness of existence. The Resurrection, what an amazing concept, that death is not the end! If Christ was raised from the dead there is hope for you and I.

In an Easter sermon, Thomas Toole, spoke about the death of Mel Blanc. You might not remember the name but if you are a baby boomer you likely remember the voice. Mel was well known for doing many of the voices for Warner Brothers, “Looney Tunes.” Often at the end of the cartoon show Bugs Bunny would appear on the screen and say, “That’s All Folks.” Mel’s family decided to do something special for Mel and so they had the following inscription written on his Tombstone, “That’s all folks.”

In the Easter story we are reminded of an empty tomb, of a risen Christ and of death being swallowed up in victory. The one who trusts in Christ never has to accept the epitaph, “That’s all folks!” There is much more to come!

As you share in Easter celebrations this week end may your hearts be encouraged with the good news that, “Christ is Risen!”

Dr. Peter Reid has been Executive Minister since 2008, serving in full time pastoral ministry since 1979. Prior to becoming Executive Minister he served as a youth pastor, a rural church pastor and as senior pastor in a growing church providing leadership and vision with multiple staff. He and his wife, Lottie, reside in Saint John. Their family includes two adult sons, one daughter and four granddaughters.