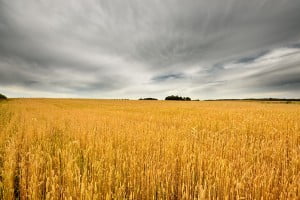 The incarnation and crucifixion teach a crucial lesson: we must become small. Especially as we sponsor refugees.

Wise hosts, however, welcome and create community. Not by engulfing, endowing, absorbing or assimilating their guests but by entering their worlds. Wise hosts become learners and recipients – susceptible and small.

If they don’t, hosts and guests alike remain lonely. Power doesn’t connect and change anyone. Weakness does.

Unless a seed of wheat falls into the ground and dies, it remains alone.

God is our refuge (making us refugees). He ransoms, rescues and resettles us. He sponsors us, adopting us into his family. But how He does it is brilliant.

At His incarnation, He became a seed, a single cell in Mary’s womb. At his crucifixion, He died, entering earth’s womb. The life of Christ is God burying Himself in the soil of this world – and it killed Him. But…

But if it dies, it brings forth much fruit.

As Syrians enter our country, we are being given the chance to enter their lives – to learn about Syria, the ancient church and Islam, to learn Arab culture and Arabic. We’re being given a chance to be laughed at by children as we blabber and butcher their alphabet. While paternalistic concern might cause us to furnish someone’s apartment, love gets us on the couch, drinking tea, smoking shisha and sharing faith.

Do not be afraid. Christ’s life is indestructible and it is in you. He is still being small, dwelling in us and being present in the world through us. As you lose your life in the lives of others, you will gain and multiply it. You will find yourself with new friends, sisters and brothers.