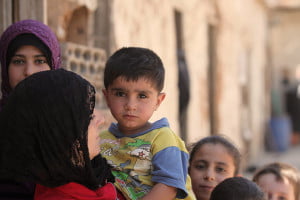 Paradise Baptist Church (NS) is moving ahead in their quest to sponsor a family displaced by the violence in the Middle East. The refugee sponsorship team of Paradise Baptist took the next step and chose the family they would sponsor and help to settle in Atlantic Canada. They had three to choose from and felt led to select the largest family – a mother with 5 children. You can follow their story here: https://www.facebook.com/paradiserefugeesupport.

Exciting stuff! Their team leader emailed me the news right away and signed off with, “We’re pumped!” What is it about committing yourself to people, for better or worse, that brings so much joy?

I happened to be reading this Scripture when the email arrived:
“Even before he made the world, God loved us and chose us in Christ to be holy and without fault in his eyes. God decided in advance to adopt us into his own family by bringing us to himself through Jesus Christ. This is what he wanted to do and it brought him great pleasure…” Ephesians 1:4-5 (NLT).

Suddenly I saw God, the Trinity, meeting and choosing those they would love and resettle (not just as citizens but as children). And they chose me (and you too)! Then I imagined them, Father, Son and Holy Spirit, high-fiving and back slapping one another – pumped.

Sponsorship is very much like adoption: thrilling, at first, for the decision-making, in-control parent dreaming of the future, but traumatic for the out-of-control child who’s dreading the future because of the past.

Integrating into a new community or family is hard and often fails. Setting up an Iraqi family, uprooted by war, in rural Nova Scotia, is a long shot that won’t happen naturally.

The sponsorship team are in for a lot of work, expense and heartache. However, such sacrifice and suffering are not by-products of resettlement or adoption. They are its heart and soul, its means, its substance. Long-term success rests on the host group or the parents absorbing and carrying the “child’s” trauma. This is resettlement and adoption.

The next verse in the Ephesians passage speaks of our redemption. Redemption has two parts: release (someone experiencing freedom and new life) but also ransom (someone else paying a very high price for it). How high?

“In him we have redemption through his blood.” Ephesians 1:7

In the near future, I’ll receive another email (or a dozen) from the Paradise team. It won’t say, “we’re pumped!” It’ll say, “We’re in pain!” And then I’ll know that the sponsorship is on track and that they really did, unconditionally, choose to resettle a family and that there’s hope.

As Canadian Baptists we are sponsoring at least 100 families affected by the crisis in Syria. The CABC is looking to sponsor 50 families. If you or your church is interested in finding out more, contact Paul Carline, Director of Intercultural Ministries (paul.carline@baptist-atlantic.ca; 506-635-1922 ext. 106).